The eyes and ears of the outpost

Mission Control is very specialized work that requires concentration, gut feeling, being able to keep quite a few details in your head during stress, and making quick decisions that don’t get people killed or equipment lost. Your primary function is to plan and lead surface missions from the control room - you handle navigation and situational awareness for the surface teams, communication, intelligence work and risk assessment, and you make the tough calls and decisions that need to be done in this risky line of work.

Your secondary function is to keep a close look at the sensors surface teams have placed around Thermopylae and beyond - sensors that collect data on the Machines and gives early warnings about their comings and goings. This is mostly done as a security measure, but the data collected this way is sometimes of use to Science or Intel as well. This is something you can also perform outside of night mission time.

Usually there is only one active mission at a time, but since you’re in crunch time before spring and the Spore Bloom you’re often running two missions simultaneously. The close range missions are usually given a lower priority, and subsequently less resources from MISCON (often just an MCOM and a Comms tech, with the other functions being handled if needed by the active Long Range mission crew). In effect, the Short Range missions are briefed and then mostly sent off without much guidance - you don’t really have the resources to guide them in the same fashion as the Long Range missions.

The structure of a MISCON team

Everyone in a MISCON team is expected to be at least basically skilled in all the specific subsystems (called “stations”) in use in the Control Room, but you all probably have specific areas you are better at and are used to doing. The basic stations of MISCON are:

MISCON M-COMS are also responsible for keeping OCOM (and by extension Intel, Science and Staff Sgts) up to date on what has happened during missions, how the upcoming missions are planned, sensor data of note etc etc.

How to deal with missions

Most missions will be pre-written and prepared by the GMs, and handed down diegetically to you via OCOM (or sometimes Intel). The most important thing about missions is that you follow the Requirements, ase those are offgame things that need to happen at specific times or places. But you would also do well trying to think of every eventuality when you plan and prepare a mission. What is the limit of your SURFOPS team? What do you do if you lose comms, navigation or sensors during a mission? What are the cutoffs of the mission, ie when do you order the team to fall back? How will you make sure the SURFOPS team understands what you want them to do, especially if you lose the ability to command and guide them remotely? Should vehicles remain at the dropoff point (default) or should they move to some exfil point - and if so, does SURFOPS know that?

All of these things are very important and should be included in your planning of missions.

Should you ever have questions about a mission (something is unclear) or you feel lost, get a hold of a GM by chatting with Operator on the network, or use the phone to call Operator.

A few words about tech

MISCON will be using some tech that not all of you will be intimately familiar with, and you will have a very short time to learn it. Don’t panic. The computer systems will be designed to be as “fool proof” as we can make them. Simple but efficient. If you have any problems with them, or any other tech, you get on the chat system and talk to Operator, which is the offgame hotline. If we manage we’ll also have a telephone line to Operator so that you can call that way and speak directly.

Here is how some of the things you are going to be using will actually work:

Comms are primarily swedish military radio systems. They have lots of features which you do not have to worry about. All you need to do is don’t touch any of the knobs or buttons on the radio unit, follow radio procedure, and press the button on the handset to transmit. Our backup for this (should radios run out of batteries, out of range or atmopsheric disturbances) will be a voice comm software on the smartphone that SURFOPS carry with them.

Each squad will have a radio with a radio operator handling it. We are using a repeater station and we should be good for about 10km of range in optimal conditions. From the repeater station (located on top of the bunker) a cable will be run to a radio station in MISCON.

You will have a computer system that displays a map of your surroundings, and each active SURFOPS team will be trackable in “real-time” on it (position will update every 10-30 seconds, as long as there is network). The positional fix is not guaranteed to be super accurate, the position can be off by as much as a hundred meters depending on location and network coverage, but it should give you a rough idea of where the team is. The map also shows earlier positions, so you can track the movements/paths of SURFOPS teams. The tech behind this is a smartphone that sends its location to our server and a web interface to display it. Since we should never trust technology, the Navigation station needs to constantly be aware of the last position of the teams so that they can transfer to the paper map if the navigation module cuts out.

The logging station will basically consist of a text editor with a mission log that the station fills in as the mission progresses. Pen and paper is very handy too, and a fallback should the computers act up.

There is not much to say about the video link. The Radio Operator of each active squad will also wear a helmet with an infrared camera and IR light attached. The image quality will not be great but enough to see what’s going on and for MCOM to get close-ups of things the SURFOPS finds. Each camera will automatically come online once the SURFOPS teams leave the bunker and get network, and the feeds will become available in the Vidlink menu. If a vidlink goes down it might be due to loss of network and/or some onboard error. The recommendation is then to call the radio operator and have them reset the camera (done by unplugging the power cable and plugging it back in) after which the camera should come online after 30-60 seconds. If the camera cuts out it’s because of technical reasons, so go with it. These things happen ingame too.

Sensors will be a simple computer interface showing you a bunch of sensors, their status (online or offline, offline is bad and means it’s been destroyed or broke down), and any sensor alerts that come in. Sensors will be marked on your (paper) map. Once a signal is detected all sensors that picked the signal up will display four things about the signal:

The bearing tells you the angle at which a signal was picked up by the sensor (0 being north), direction tells you what direction (once again, 0 being north, 180 being south) the transmitter was headed when the signal was sent, speed should be self explanatory, and finally spectrum analysis is a graphical representation of the signal itself.

There are two manual tasks that the sensor operator needs to perform when receiving a sensor alert. The first is determining a position for the signal; this is done by checking the position of one of the receiving sensors on the (paper) map and then using a protractor centered on the sensor position and drawing a line (on a plastic sheet over the map) from the sensor along the bearing of the signal. Then you do the same for the other sensor that also picked up the signal. Where the lines intersect is the position of the signal emitted.

From that point you will then determine (if speed was greater than zero) the heading of the machine that transmitted the signal, again using the protractor but this time centered on the intersection of lines. The direction value for the signal from each sensor tells you the direction of the transmitter relative to map north (which is 0°, remember). A direction of 90° means the emitter was headed straight east. Place the protractor on the intersection of lines and draw another line (ending in an arrow) in the direction given by the sensors. This is the direction (heading) the transmitter was travelling when you picked the signal up. These last calculations are a simplification to make this work fun and not tedious, as in real life you’d get relative bearings on the sensors too. 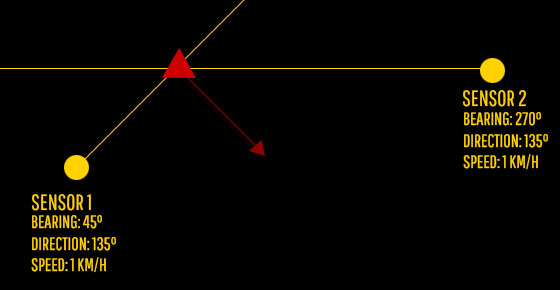 (Not the actual interface)

From here you can approximate where the signal will be at certain times using the speed value and some mental calculations (refer to your scale figure on the map and use a ruler), but this is rarely necessary as machines tend to change directions. But it’s a good indicator on where a machine might be ten seconds from now or a minute later, depending on its speed.

The second thing after determining the position and heading of the signal is spectrum analysis. The spectrum analysis gives you a graphical representation of the electromagnetic spectrum of the signal. This is what you use to determine what type of machine transmitted the signal. Most Machine types so far encountered have distinct “profiles” that Haven has painstakingly cataloged. Look at the spectrum analysis and refer to your catalog of known machine profiles to determine what type of machine emitted the signal. If you cannot find it in the catalog: congratulations, you have just found a new machine type and you get to suggest a name for it.