I am the ultimate badass! State of the badass art!

Surface Operations Teams are the people who perform missions on the surface, often risking their lives in the process. They are drawn from (mostly) volounteers in Haven, and trained there before being sent out to the Outposts.

You mostly do your surface work at night, partly because there are fewer active biologicals at that time, but also because the cover of darkness helps keep you undetected. There are exceptions however, often when something has gone pear shaped, when you need to perform a surface mission in broad daylight. You jokingly call these missions "running naked", and you really fear them. Fortunately, few of you have ever been called upon to perform one.

There's a saying in Haven: "There are no SURFOPS veterans", and it has some truth to it. Every single surface mission is terrifying, even if nothing happens. You are literally in the dark, outnumbered and outgunned at every turn, a single mistake from being killed or worse. As if that wasn't enough, the constant exposure to the spores (despite all the scrubbing) tend to bring with it coughing, damage to the lungs, irritated skin and eyes and many other adverse health effects. And, despite what the dreamers in the tunnels may think, going up and seeing the destruction on the surface, seeing the sky and stars and hearing the birds sing and then having to crawl back underground every day takes its toll on you all. It breaks the hearts of those whose hearts have not yet become stone. Few are those who do more than a couple of six-month rotations of SURFOPS duty before begging for other work.

As a member of a SURFOPS team, your immediate superior is your Squad Leader. The Squad Leader commands the team during Mission Time, and is also responsible for organizing and structuring the team and handling any issues at other times.

Outside of Mission Time, the Squad Leader in turn takes their orders from the acting Staff Sergeant (or, in case there is confusion or need for clarification, Head Tactical). It is also common for Staff Sergeants to lead SURFOPS tactical briefings before a mission, but this can also be done by MISCON.

During Mission Time, the Squad Leader is commanded by the Mission Commander (MCOM, of Mission Control). It is common for at least one Staff Sergeant to be present in MISCON during missions, to advise and observe, but orders are given by MCOM and cannot be countermanded by Staff Sergeants.

The next level of command is the Outpost Commander (OCOM) when present, otherwise the acting XOs. Direct orders from OCOM or XOs overrule orders given by all other instances, but OCOM/XOs should never have to order a squaddie around directly.

As a typical SURFOPS squad member, all you need to do is listen to your Squad Leader and do what they say. Direct any questions to them and don’t bother people higher up the chain of command with unnecessary questions - they’ll have more than enough to handle already.

All SURFOPS teams will have the chance to perform at least one Long Range mission and a few Short Range ones.

The Long Range (LR) missions take place away from Thermopylae, and SURFOPS teams (and any attached specialists or auxiliaries) load up in surface vehicles inside Thermopylae and are then transported to their mission. These missions are typically longer and more action-oriented.

The short range (SR) missions take place in the vicinity of Thermopylae, within walking distance. These are typically shorter duration missions, and often involve escorting specialists from other branches as they perform repairs, take samples etc.

For a short while now SURFOPS teams have been pulling much more surface time than usual. This is due to the fact that spring is coming, and with it comes the Spore Bloom and increased activity on part of the Enemy biologicals. In a months time the surface will be a much more hostile place, requiring respirators for surface operations and risks being much higher.

>As a consequence of this SURFOPS teams are feeling the fatigue, and a lot of things are being done more ad hoc than usual. This also explains why - offgame - not all of you will know all the lingo, why mistakes will be made and why confusion occurs. You’re operating under SNAFU - Situation Normal; All Fucked Up, and things tend to become less structured, more informal and “quick and dirty”. 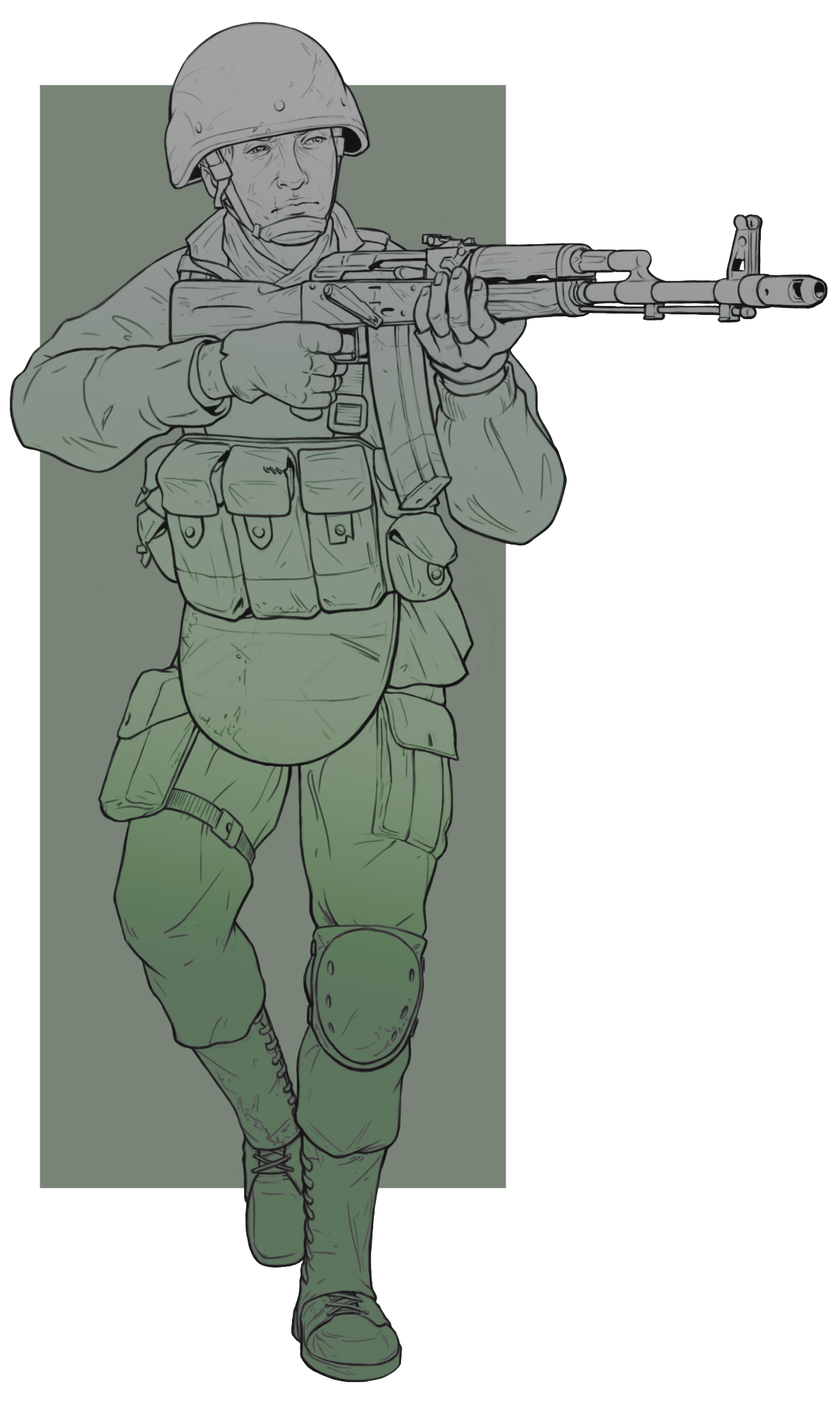 Your Squad Leader, or more typically a Staff Sergeant, will hold drills, training and exercises for your squad. This can range from theoretical lessons, briefings on Enemy capabilities or behaviour, via tactical training to physical exercise. Most common is tactical training, ie training movement and fire, tactical operations and situational awareness, performed inside Thermopylae.

Physical Exercise can be ordered - but regardless of the intensity and your off-game capability you as a player will have control over just how much energy to put into this exercise. If someone orders you to drop down and do 20 sit-ups and you feel you can only do three or four, then do that and everyone will play along as if you just did 20.

In the case of extraordinary events, such as a Code Red or Code Blue, SURFOPS teams are required to lend assistance to INTSEC. In these situations chain of command might be hard or impossible to establish, and as such every SURFOPS member attaches to the nearest unit, be it INTSEC or SURFOPS. Your number one priority in these cases is to quickly form a fighting force and be ready to repel incursions into the Outpost. If possible, Squad Leaders should form their teams and attach to an INTSEC unit, taking their orders from them.

The purpose of reconnaissance (recon) missions is to gather intelligence on Enemy installations, movements, forces, behaviour or capabilities, while remaining undetected. The number one priority, unless stated otherwise, is to remain undetected, with reconnaissance goals being secondary.

An escort mission is one where SURFOPS are tasked with guiding and keeping other Outpost personnel safe during a surface mission. Most often this mission is a foraging or repair mission conducted by Maintenance crews, but mission profiles can vary greatly. During an escort mission the Squad Leader makes tactical decisions when need be, but the mission is led by whatever designated team leader the escorted group has in place.

A sabotage mission is one where a SURFOPS team attempts to disrupt Enemy operations or damage Enemy installations or equipment through different means of sabotage. Most often this is conducted using explosives and/or ranged weapons. Sabotage missions can also be performed in order to lure the Enemy into a specific area (or to draw them away from another one).

The purpose of a Direct Action (DA) mission is to engage the Enemy in combat and cause them as much damage as possible while minimizing losses on our side. DA missions are usually conducted as ambushes (ie surprising the enemy from hidden locations), but can also be performed in a predatory manner (seek and destroy) or even as a diversionary tactic to draw Enemy attention away from other operations.

A capture mission is one where the SURFOPS team attempts to capture (in working order/alive) an Enemy machine or biological, often for analysis by Science teams. These missions tend to be very risky, as the SURFOPS team must get very close to active Enemies and cannot utilize full destructive force. For capturing machines the SURFOPS team utilize a portable Electronic Field Projector, colloquially known as an “EMP”.